This single layer snickerdoodle cake features a soft vanilla cake with cinnamon brown sugar swirls throughout, topped with a cream cheese frosting for the distinctive tangy flavor of a snickerdoodle cookie! Made in an 8×8″ pan, this is a great small cinnamon swirl cake for brunch or dessert.

This post is sponsored by Domino® Sugar and all thoughts and opinions are my own. Thank you for supporting the brands that make Katiebird Bakes possible!

There are many holiday cookies out there to love, but the humble snickerdoodle cookie stands apart for me (and I’m sure, for many Midwesterners). There’s something about biting into a warm, slightly tangy, cinnamon-sugar-crusted cookie that just can’t be beat! Plus, there’s really no reason to limit this delight to the holidays – cinnamon and sugar are always in style.

So when it hit me like a ton of bricks one day that one could likely incorporate that vanilla, cinnamon sugar, and je ne sais quoi tang combination of a snickerdoodle cookie into a SNICKERDOODLE CAKE…well, the thought could not be banished.

I figured my standard smaller vanilla cake recipe (which you’ve seen in various incarnations with my single layer lemon cake, rhubarb cake, and most recently cranberry crumb cake) would work well for this adaptation when swirled with a combination of brown sugar and cinnamon…and let me tell you, IT DOES.

I wondered at first if I could use cream of tartar (aka tartaric acid) instead of baking powder for the rise in the cake, as it’s the reason for the tangy flavor of snickerdoodles. After some research, however, I determined it might be too finicky and stuck with baking powder, instead deciding to recreate the slight sourness with CREAM CHEESE FROSTING.

As my husband Brian said today when polishing off the last slice of the snickerdoodle cake, “I would eat garbage if it had cream cheese frosting on it.”

Well, let’s hope the rest of us have slightly higher standards, but you get the point.

As I mentioned, this is my standard small vanilla cake recipe, and I decided to bake it in an 8×8 inch square pan for that cute, plush sheet pan effect (and so the cake would be thicker so we could see the swirls). You could definitely make it in an 8 or 9 inch round pan if you prefer – just watch the baking time as the cake will be thinner if you use a 9 inch round (more like 30-32 minutes).

The cake is made with the traditional method using a mixer: cream butter and sugar (I used Domino® Granulated Sugar for moisture and sweetness), add your eggs and vanilla, then alternate adding your dry ingredients with buttermilk (or sour cream or greek yogurt) until a smooth cake batter is formed.

Important: don’t overbeat the cake! Stop once it is smooth and combined, and fold any flour bits that may be on the bottom of the bowl in with a spatula. Overbeating cake batter makes for a tough cake, and no one wants that!

The cake is swirled throughout with little rivers of cinnamon brown sugar, and you know I search out the piece with the most swirls. I used Domino® Light Brown Sugar for this cinnamon sugar swirl because of its nutty, caramel flavor, moistness, and subtle hint of molasses. You really don’t need butter or any additional moisture for the swirl because the Domino® Light Brown Sugar melts into glorious layers as the cake bakes.

So all you do is mix brown sugar and cinnamon together in a small bowl and you’re ready to swirl!

Now the fun part: take a butter knife and gently swirl up and down, then side to side. Just once through! Otherwise you’ll mix it in too much and you won’t have defined swirls.

I mean, this is pretty much self-explanatory, right?

All you need to do is whisk softened cream cheese with powdered sugar, vanilla bean paste or vanilla extract, and enough milk (dairy or non-dairy, both are fine) to achieve a thick, pourable consistency.

I used Domino® Confectioners Sugar for this icing as it has a very fine, exceptionally smooth texture which is perfect for frostings, glazes, and icings! It also contains cornstarch to prevent caking, giving us that ultra-smooth cream cheese icing perfect for drizzling over the cake.

Pour it over the cooled cake in whatever pattern you desire. It’s ok if it’s a little more rustic, like mine. Perfection is overrated! 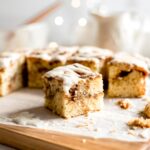 For the Cinnamon Sugar Swirl:

For the Cream Cheese Frosting:

For the Cream Cheese Frosting:

*if you don’t have buttermilk, you can substitute an equal amount of sour cream or full-fat Greek yogurt, or use 1/2 tablespoon of lemon juice mixed with 1/2 cup of milk and leave to curdle for 5 minutes before using. Cake will keep, well-wrapped in the fridge, for up to 5 days. I like to microwave leftover pieces of cake on 50% power for 20 seconds to reheat.