This rhubarb cake combines an almond-scented, light, buttery cake base with tart rhubarb on top for an elegant summer brunch or dessert.

This rhubarb cake has a troubled history.

Mostly troubled in the sense that I could not leave a perfectly fine cake alone, and insisted on messing with it. For months.

You see, I’ve been baking this rhubarb cake repeatedly, and by repeatedly I mean no less than four times, in the past two months. Not because it was bad the first time, or the second time, or the third time. I kept baking it and tinkering with it because I believed I could do better than a “good” cake, despite several testers telling me it was delightful the way it was.

Sometimes I tell myself my perfectionistic nature is an asset. This isn’t one of those times.

If I would have just accepted that this almond-scented, light, buttery cake with tart rhubarb on top was perfectly fine as it was on the first or second try, you’d have been reading this recipe at the end of May.

Instead here we are, nearly in August with rhubarb mostly out of season, and I’m finally publishing this rhubarb cake exactly the way I made it the first time, because it was just right the first time.

I wouldn’t even have published it now, and would likely have continued in a spiral of “well it’s out of season now so what’s the point” and “it’s way too late on a Sunday night and it’s a lot of work and I’m tired” — except that Brian finally turned to me tonight and said, “stop messing around and complaining and wasting time, and just do it already.”

Just do it already.

Nearly three years down the line of writing this blog, I sometimes forget that I started it because I truly loved baking — just for the sheer joy of it — and wanted to share some great recipes for people to bring into their lives.

Somewhere in the chaos of SEO and advertisers and Google algorithms and site speed and lazy loading (I still really don’t know what that means), I’ve become convinced that in order for this blog to be successful, every single recipe, every single post, has to be completely perfect before it is published, and that belief has taken all the fun out of it.

If you couldn’t already tell, I tend towards Type A perfectionism to begin with, and the world of food blogging contains a lot of opportunities for comparison and obsessiveness. Every day it seems like someone else publishes a recipe that I’d been thinking of developing, and they do it faster and better.

This has led to a paralysis of sorts that I feel has held me back from doing what I really wanted to do in the first place: share simple and approachable recipes and have fun in the process.

You may have noticed that my posts have been less frequent of late, and this is why. The comparison trap and the need for perfection are strong.

But the truth is, if I don’t show up because I don’t feel perfect, then my voice is silenced. The way I express myself through this blog and these recipes is silenced. And I don’t give myself the opportunity to fail or succeed because I’m not even willing to try. Yes, this is just a baking blog, but it feels like a larger statement about life, too.

My middle school math teacher was obsessed with basketball and he always had one of those cheesy posters on the wall in the classroom that said “you miss 100% of the shots you don’t take”. You know what? That’s not cheesy, it’s just true.

So here is a recipe for a really good rhubarb cake. Maybe it’s not the “best ever rhubarb cake” or “the only rhubarb cake recipe you’ll ever need” or whatever other superlatives people use when naming recipes – but it’s dependable, it’s light and subtle, it has been tested to high heaven, and it is good.

We’ve dealt with rhubarb before on this blog — see these rhubarb rolls and strawberry rhubarb pie for a refresher — but it remains a finicky vegetable slash fruit nonetheless. Exceedingly tart and really only edible when cooked in sugar, it’s still one of my favorite summer ingredients because it’s so unique.

My best friend’s mom tried to grow rhubarb in her garden this year, which would’ve been awesome but for the fact that her dog insisted on marking his territory on the plant, and it has grown thin and spindly ever since.

So maybe next year I’ll get to try rhubarb from her garden, but until that time it’s generally available at farmers markets and the grocery store in early summer.

Notes on making this rhubarb cake

So, here’s the recipe for this very good, very dependable rhubarb cake. Thanks for being here – I truly appreciate it. 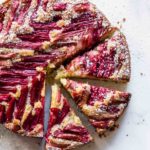 *if you don’t have buttermilk, you can substitute an equal amount of sour cream or full-fat Greek yogurt, or use 1/2 tablespoon of lemon juice mixed with 1/2 cup of milk and leave to curdle for 5 minutes before using.   Cake will keep, well-wrapped at room temperature, for up to a day.  It will keep in the fridge for up to 5 days.