Super dark chocolate brownies: made in one bowl with dark cocoa powder, these midnight brownies will satisfy all your late night chocolate cravings and they’re ready in under an hour.

Let’s be honest: I love brownies and realistically, won’t turn any down.  What I will say, however, is that these are the most intense, deeply dark chocolate brownies made with cocoa powder that I’ve ever had, and they happened entirely by accident (as most genius things do).

The story begins last weekend, when I made my favorite brownie recipe for a party celebrating the weekend appearance of a friend who lives in LA.  Brownies are my go-to party food since they take almost no time to make, require no separating and rolling like their high-maintenance cookie cousins, and cause people to go bananas at the mere sight of them.  So I made them, brought them, had some wine, and watched other people enjoy them — but they were gone before I was able to snag one myself.

I wasn’t going to be greedy and take one before everyone else, but the truth is that brownies, especially brownies warmed and covered in vanilla ice cream, are one of my guilty pleasures.  So I was fairly disappointed that I’d missed out.

By Tuesday of this week I couldn’t stand it any longer and decided, upcoming beach vacation be damned, I was going to make a whole batch of brownies just for the two of us.  YOLO.

So I rummaged through my cabinets, grabbed the normal (aka natural) cocoa powder, opened and…you can guess what the problem was.  Some very rude person (hi, it was me) used all but like, two tablespoons of the cocoa powder, and put it back in the cabinet without buying another one.  Amateur hour over here.

Frustrated, inner chocolate monster in full force, I kept rummaging until I reached the very back of the cabinet where a half-used container of that Hershey’s special dark cocoa (a mix of natural and Dutch process cocoa) and some espresso powder were hiding out.  Desperate times, desperate measures.

So I mixed them all together with the scant amount of natural cocoa I had.  What could go wrong, I thought, cursing myself the whole time for being too lazy to go to the grocery store.

Nothing went wrong.  In fact, it went VERY right.

The mix of powders and the hint of espresso combined to make the most deeply dark cocoa brownies I’ve ever had.  You know I’m a huge fan of dark chocolate (if not, these molten chocolate cakes should have been a clue) and these are the epitome of that.

They don’t taste like coffee; the espresso powder just enhances the absurdly intense chocolate flavor.  Of course I added coarse sea salt on top, and I wouldn’t skip that either if I were you.

Blooming the cocoa: The important thing, no matter which cocoa powder you’re using, is to “bloom” the cocoa powder by whisking it into hot melted butter before combining it with any of the other ingredients, then letting it sit for a couple minutes.  This brings out the chocolate flavor like you wouldn’t believe (the smell alone is unbelievable).  If you’re a super nerd like me and interested in the science of cocoa blooming, I found this article by the Kitchn quite helpful.

After you bloom the cocoa, it’s just a matter of simple whisking: sugar, egg, vanilla, salt, flour, chocolate chips.  No mixer needed. Not too much flour. One bowl, magical results.

NOTE: This is a thinner, cake-like, cocoa powder only brownie.

Several readers have mentioned that the batter seems thin when you spread it into the 8×8 inch pan. That’s ok! These brownies are thinner and denser than your average brownie. They also bake up to be a bit cake-like, with very deep cocoa flavor. Some people love this and some don’t!

If you’re looking for a more traditional fudgy brownie recipe, I recommend:

I’m not sure whether I called these Midnight Brownies because of: 1. their color; 2. the fact that you could make them at midnight, when the brownie cravings usually hit, pretty easily; or 3. I was wearing some super dark nail polish when I made them.  Regardless, you get to enjoy the result.  Please bring them over if you do, because we ate the whole pan already. 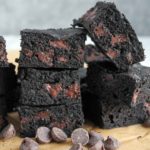 *You can use natural or Dutch process (alkali) cocoa in these dark chocolate brownies, and either will be delicious.  In these photos I used Hershey’s Special Dark, which is a mixture of natural and Dutch process cocoa.  Because there is no leavening agent in this recipe, any cocoa will work.  For the darkest color, use Dutch process.  If you want to read up on the differences between natural and Dutch process cocoa, King Arthur Baking has a great article here. Recipe somewhat liberally adapted from Dorie Greenspan’s Tribute-to-Katharine-Hepburn Brownies in Baking: From My Home to Yours.

Excuse me, I have to go make them.  Again.