Salted brownie cookies: deeply chocolatey, fudgy cookies with crisp edges and a sprinkle of flaky salt on top.  Also known as the best thing my kitchen has produced in a very long time.

I love it when a random baking idea hits me and the resulting recipe just WORKS.

Let me be clear: it doesn’t happen often.  Usually it’s fail after fail after mediocre fail, followed by me giving up for a while, followed by trying again a week or a month or a year later, again and again until finally I am pleased with the result.

These little bites of heaven came into the world already knowing exactly what they wanted to be, and they delivered.  I woke up one morning last week obsessed with the idea of the intense, fudgy chocolate of a brownie, but the crisp, shattering edges of a cookie (wait, is this not normal? you don’t wake up dreaming of these things?).

I knew there would have to be salt on top, as all good chocolatey things need salt to balance them.  But would it be a cookie dough masquerading as a brownie, or would it be actual brownie batter that I’d somehow firm up enough to keep its shape as cookies?

So as soon as I could, I did some research and discovered that a few other people had shared my brain wave.  Namely, Food & Wine had a lovely-looking recipe that I knew I could tweak to my own preferences (removing some steps, no mixer, different proportions, etc).  It was a brownie batter chilled until scoopable, which is genius and which I thought I could work with.  So tweak I did.

I baked it once; I baked it twice; I fed it to family at a dinner, and friends by the pool.  And the results are in: salted brownie cookies are the best things that have come out of my kitchen in quite a while.  Brian’s family wouldn’t let us take any back home with us, and I watched with delight as one of my friends went through four in a row while sitting by the pool (don’t let her know I told you that).

And they’re actually really easy to make!  Like, dangerously easy.  Let’s talk about this.

Steps and tips for success:

You need to make these, ASAP.  Honestly, I have nothing else to say. 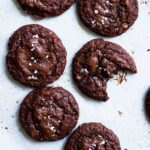 For the chocolate, use a dark chocolate BAR with at least 50% or more cocoa solids, up to 70%.  I used Trader Joe’s Pound Plus Dark Chocolate, which has 54% cocoa solids, but I think a darker chocolate would produce an even more intense flavor.  I do not recommend using chocolate chips here as they have a wax coating on them that prevents them from melting well.   Cookies will keep for up to 5 days covered tightly at room temperature, though I seriously doubt they will last that long.   Recipe adapted from Food & Wine.