If you thought you couldn’t make fudgy brownies without a box mix…you were wrong. This recipe is chock full of tips to make homemade brownies fudgy!

A truly fudgy brownie is hard to find

Well, if you’re reading this page, you have an interest in the real kind of baking; the creaming butter, sifting flour, whisking in eggs, folding in chocolate kind of baking.

Some people say they like baking, but when they say that, they really mean the “dump mix into bowl with water oil and eggs” kind of baking.  And don’t get me wrong – there is a time and place for that kind of baking, and there’s no problem with it, if that’s your thing.

But we all know, that’s not my thing.

I’m a get-your-hands-dirty, make-your-own, homemade-is-best kind of girl, and I’m not ashamed to admit it.  I make my own nut butters and cinnamon rolls, and you will not see me using a cake mix unless I have run out of all other ingredients and it’s an emergency.

But brownies.  Brownies, particularly homemade brownies that are actually fudgy…well, they’ve given me some trouble.

But how to make homemade brownies fudgy?

I’ve been trying for years (honestly, years) to concoct a homemade, from-scratch fudgy brownie recipe that was ACTUALLY FUDGY, and not essentially chocolate cake hinting at fudginess or bordering on fudgy.  I kept wondering to myself: why is it that all homemade brownie recipes seem to produce dry and cakey brownies, no matter how fudgy they promise to be?  Are we really unable to replicate the luscious, deep chocolate flavor and texture of a boxed brownie at home?

Yet again and again, I tried and failed.  So, embarrassingly, up until now, when I’ve wanted fudgy brownies, I’ve resorted to a box mix.  I am not proud of this.

(I will say that Trader Joe’s Truffle Brownie Mix is insanely, insanely good for a box mix.  But still, it irked me.  I knew I could do better.)

You see, some brownie recipes use melted chocolate, and some recipes use cocoa powder mixed with butter (and they are on the cakey side, like my Midnight Brownies).  I surmised that maybe using cocoa powder added too little fat and resulting moisture, meaning the brownies became drier and more cake-like as they baked.  So I tried a couple recipes that used melted chocolate, and more butter, instead.  They were slightly better, but I found them overpoweringly rich and still just not the right texture. I wanted my perfect fudgy yet still chewy brownie!

It wasn’t until I saw the recipe Sally’s Baking Addiction posted for fudgy brownies that I realized the secret: you have to use melted chocolate AND cocoa powder, not either or.  I messed around with some ratios in my normal brownie recipe, and …Eureka!!  Fudgy brownies with intense chocolate flavor!  Sally is a genius.

So, there are not one, not two, but THREE forms of chocolate in these brownies that makes them both fudgy and chewy with perfectly rich chocolate flavor:

If I’m going to make something chocolatey, you better believe I’m going all the way.

Brian has declared these “the best brownies he’s ever had” which, to me, is quite a compliment.  He’s eaten quite a few brownies in his life.  I clearly have too, and I have to say, I don’t think I need another brownie recipe.  This is the one.  It has the texture and flavor of the deepest chocolate fudgy brownies, and to be honest, I think it’s even better than a box mix.

Ok, let’s do this!  I hope you love these homemade fudgy brownies as much as we do. If you make the recipe, please leave a star rating and review, and tag me on Instagram @katiebirdbakes so I can see your bakes! 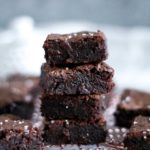 Storing: Brownies will keep, well-wrapped at room temperature (I pack them tightly in a tupperware), for up to 5 days. Cocoa powder: you can use natural or Dutch process cocoa powder in this recipe.  Since there is no leavener, the chemical reaction isn’t a factor here so use what you prefer! Espresso powder: it will not make the brownies taste like coffee – it enhances the chocolate flavor.  You can buy it at most grocery stores in the baking aisle, or on Amazon. Recipe adapted from my Midnight Brownies and Sally’s Baking Addiction.