Welcome to the weekend.  I have a feeling it’s going to be a good one.

How was your week?  It was a busy one for me.  I had a job interview, I met some lovely ladies in person for the first time that I had previously only known through Instagram, I tested lots of new recipes, went to Pure Barre a bunch, got coffee with a dear friend, and received SO MUCH positive feedback from you all about this little blog that my heart can barely stand it.  Thank you.  You don’t know how much every little comment means to me!

It’s so strange to work for so long by yourself on a project like this, and then to suddenly put it out there to the whole world and have people read it and react to it.  I had been keeping this site private for so long because I was waiting for it to be perfect before putting it out there – but I realized that just like everything that is human, it will never be perfect, and it will always be changing, and that’s what’s great about it.  So, this space isn’t just mine anymore – it’s yours too.  And that is both weird and cool at the same time.

What can also be yours in less time than you’d think: these unbelievably soft, sweet, decadent cinnamon rolls.

Do yeast-based doughs scare you as much as they scare me?  I always seem to shy away from them because I’m nervous that anything and everything will go wrong – I’ll over-knead it, the yeast will die because the water is too hot, I’ll let it rise for too long and everything will collapse and wind up in the trash can with my failed hopes.  I’m not dramatic in the least.

Well, I’ve decided I need to just get over it and start trying, because when things like these cinnamon rolls exist, it’s worth it to push through your fear.  This recipe is really not intimidating for a yeast-based dough, so it’s a good place to start.  No mixer.  No kneading.  No bread flour.  A very pliable dough that doesn’t stick to everything it touches.  And the end result is HEAVENLY.  Grab a cup of coffee and let’s do this!!

I love how simple this recipe is.  All you need is a large pot (I used the second love of my life aka my Dutch oven) and a wooden spoon.  Delicious baked goods do NOT have to be intimidating.  The only thing you really need with these rolls is time and patience, because they will smell amazing long before you can sink your teeth into them.

See the pictures above for the basic steps.

STEP 1: we heat milk, a neutral oil of your choice like canola or olive oil, and sugar together until just under a boil. Why do this annoying extra step? Because we’re scalding the milk to denature the whey proteins and allow for better gluten development and moisture absorption in the dough. It’s science! Can you just use warmed milk and skip this step? Yes, but the results won’t be quite as good.

STEP 2: let the milk mixture cool until it’s just warm to the touch (about 105-110 degrees F – I checked this with a digital thermometer but you can just stick your finger in there to judge too).

STEP 3: mix in the first 4 cups of flour and let it rise, covered, sitting on your stove until doubled in size. This should take about an hour depending on the temperature in your kitchen. I just put the lid on my Dutch oven and let it sit on the back of the stove – if your kitchen is cold, turn the oven on for some ambient heat!

STEP 4: once the dough has done its first rise and is nice and puffy, stir in the remaining 1/2 cup of flour, baking soda, baking powder, and salt, until a cohesive dough forms. The dough should not be insanely sticky – if it is, place it in the refrigerator for an hour. That will help calm down the gluten and allow the flour to absorb more moisture.

Roll out half your dough to a rectangle shape, about 12 inches long, and spread it VERY liberally with melted butter.  This is not a time to worry about calories.  Sprinkle on brown sugar, then cinnamon.

STEP 6: roll it up starting with the long edge furthest from you, and cut it into 8 evenly sized rolls with a very sharp knife.  Arrange in a pie plate (my favorite vehicle for cinnamon rolls) or 9-inch round cake pan.

STEP 8 and the best part.  Take these babies out of the oven and marvel at your accomplishment. Spread cream cheese icing all over them (if they’re still warm, the icing will melt in a bit!) and EAT.

Would you look at those swirls???  Sadly we’re going to cover them all up with cream cheese, but it’s worth it.

Spread that icing generously over all the rolls, and serve warm to people you love.  You’ll be their favorite person of the year.  These rolls are soft, sweet, cinnamon-y, and the vanilla cream cheese glaze over the top is just outrageous enough to be repeated again and again.  Good luck keeping these around longer than 24 hours.

Have the best weekend! 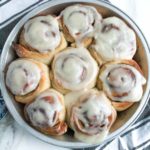 Store any leftovers (not likely) in the fridge for up to 5 days, and simply microwave for 20-30 seconds to reheat. Make ahead overnight instructions: the cinnamon rolls can be prepared the night before through step 6 (shaping the rolls and placing in the pans).  Cover pans with plastic wrap and place in the fridge overnight.  In the morning, set pans out on the counter while the oven is preheating to allow rolls to come to room temperature, then bake as directed. Freeze the baked rolls: baked and iced rolls can be frozen, wrapped individually in plastic wrap and stored in a freezer bag, for up to 3 months.  Simply microwave for 30 seconds or warm in a 250 degree oven for 15 minutes to reheat.  Freeze the dough: Shaped cinnamon roll dough can be frozen, well-wrapped in the pan or another container, for up to 3 months.  Set out on counter for 2 hours before baking to allow to come to room temperature and complete their second rise.  Bake as directed. Best milk alternative: oat milk has worked best for me!  Almond milk will require at least 1/4 cup more flour to avoid an extremely sticky/unworkable dough. Halve the recipe: You can halve this entire recipe for just 8 cinnamon rolls!  All steps are the same and you’ll only need one pie plate/cake pan. Cinnamon roll recipe adapted as a smaller batch from The Pioneer Woman.

I guess yeast isn’t so bad 🙂