These easy small batch sticky buns are no-knead, made in just one bowl, and have a maple pecan topping and a brown sugar cinnamon filling for the perfect brunch treat. This smaller recipe makes just 8 rolls and it’s the easiest way to make homemade sticky buns from scratch!

I am excited to share this perfectly small sized recipe for sticky buns with you today, because they are truly something special. And by that I mean, not only are there less of them to tempt you, but they’re also not as sweet as you might expect.

Am I alone in the opinion that sticky buns are, as a general matter, WAY too sweet? Whoever came up with the idea of putting a syrupy topping on an already sweet cinnamon roll really had a thing for sugar. When I was doing research for this recipe, the amount of corn syrup and brown sugar I saw in most recipes was shocking.

Good news: I tested and tested again, repeatedly, until I created a winning formula for a sticky bun recipe without corn syrup, without unnecessary sugar, and with a subtlety of flavor that I believe most recipes are lacking.

The secret lies in using maple syrup and just a bit of brown sugar in the topping. We add complexity of flavor with the maple syrup, rather than cloying sweetness, and balance it with salt. The result is a much more subtle and flavorful sticky bun, and I think we are all better for it.

So, we’re ready and excited to make some easy, no-knead sticky buns. Let’s start by asking the question on everyone’s minds, though:

What is the difference between a sticky bun and a cinnamon roll?

I’m glad you asked. The answer is that sticky buns vs cinnamon rolls are actually quite similar – the difference is in how they are prepared. They use the same dough, which is an enriched dough that is rolled out, filled with butter, brown sugar, and cinnamon, and then rolled back up again to form the spiral rolls.

At that point, though, cinnamon rolls are baked without a topping. Usually a frosting or icing is added after baking and cooling the rolls (like my cinnamon rolls with cream cheese icing, aka the most popular recipe on my blog). Sticky buns are baked with the brown sugar pecan topping already underneath them in the pan, and after baking they are immediately flipped onto a serving platter so the topping (now on top) oozes into all the cracks and crevices of the rolls. No further icing necessary.

There are a few steps involved in this small batch sticky bun recipe, but I promise each step is easy, and the results are entirely worth it. At the end you’ll have 8 perfect sticky buns to enjoy — or if you’re like me, you’ll freeze some for a glorious rainy day.

Step One: make your dough. We’re making no-knead sticky buns, so making the dough will be very simple – just one bowl and a fork, no mixer required! Just heat your milk, oil and sugar together in the microwave or on the stove until warm to the touch – about 110 degrees F, like bathwater. Don’t heat it warmer or you might kill your yeast! This recipe works best with dairy milk, but I’ve also used oat milk with great results. My tests with almond milk produced a much stickier dough, so fair warning, you’ll need to add more flour if you choose to use almond milk (see recipe for full instructions).

Then we mix in the yeast (both active dry and instant work, see recipe for full details), and most of the flour, stirring until a shaggy dough forms. That’s it – time for the dough to rise.

Step Two: let dough rise and make your topping. I like to leave my dough covered with a tea towel in a turned off oven, with just the oven light on. It creates a protected, slightly warm environment for the yeast to devour those sugars and grow! After about an hour, the dough should be doubled and puffy.

While the dough is rising, make the topping by combining melted butter, brown sugar, maple syrup, half and half, cinnamon, and salt until smooth, and then pour in the bottom of a greased 8 or 9 inch round cake pan. Scatter pecans on top! This will be the glorious syrupy topping once the sticky buns are flipped.

Step Three: add flour and roll out dough! Now it’s time to stir in a bit more flour, with some baking powder and baking soda for good measure. This may require some elbow grease to get the additional ingredients fully incorporated, but when you’re done you should have a very pliable, non-sticky dough. IF your dough is still very sticky (this is quite likely to happen if you use almond milk) stir in additional flour a tablespoon at a time until the dough is tacky, but not sticky and unworkable.

Roll the dough out on a VERY well-floured surface (to avoid stickiness). Make sure to flour your rolling pin too. The dough should be fairly easy to work with and not sticky. You’ll roll it into a 12×8″ rectangle – the dough should be about a half inch thick.

Step Four: fill and roll it up. Spread melted butter over the dough, then evenly sprinkle brown sugar and cinnamon over top. Roll dough up along the long edge, then cut into 8 even slices with a sharp knife or unflavored dental floss. Remember, this is a small batch sticky bun recipe so 8 buns is all we need! Place the buns evenly over the topping in the prepared pan.

Step Five: preheat oven during second rise, and bake. Turn your oven on and let the buns rise for a second time for 20 minutes. Then bake! You’ll want the buns to be a light golden color – not super toasted.

Now, here’s the tricky part: have your serving plate ready before you take the buns out of the oven. You want to flip the sticky buns out onto the serving platter within a couple minutes of removing from the oven, or the syrup will harden and stick in the pan. Nobody wants that kind of tragedy!

Step Six: flip! When you take the sticky buns out of the oven, set them down and then set the serving plate upside down on top of the pan. Then, using oven mitts, hold on to the bottom of the plate and the bottom of the cake pan, and flip! Carefully remove the pan and you should have eight beautiful sticky buns with maple pecan topping oozing down the sides. If any topping was left behind in the pan, simply scrape it out and put it back on the buns – no one will care if they’re a little messy once they take a bite.

Enjoy this small batch of homemade sticky buns warm – it’s truly heavenly. The soft, fluffy rolls combined with the brown sugar cinnamon filling and the salted maple pecan topping in every bite…there truly aren’t words for how GOOD this is. And that is precisely why there are only 8 of them. It’s to protect us from ourselves!

What size pan should I use?

My favorite pan to use for cinnamon rolls and sticky buns is actually a 9″ pie plate, but an 8″ or 9″ round cake pan will do the trick too! All of these will perfectly fit the 8 buns.

Can I make an even smaller batch of sticky buns with this recipe?

Why yes, you can. This recipe can be completely halved and baked in a 6-inch round cake pan for just FOUR sticky buns. No other modifications needed – use the same process, temperature, and bake time. 4 perfect homemade sticky buns can be yours in a frighteningly short amount of time.

Can I use non-dairy milk?

Yes, but you may need to add more flour to the dough, particularly if you use almond milk. I’ve found that oat milk is the best substitute for dairy milk in this recipe. Almond milk produces a very sticky dough, likely due to the lower protein and fat content vs dairy milk. If you use it, you’ll need to add up to 1/4 cup additional flour to the dough when flour is added after the first rise, until the dough is tacky but not sticky. You may want to knead it a bit with additional flour to make it workable.

Can I prep these the night before and bake in the morning?

Yes – you can prepare the rolls up until the second rise the night before. Let them do the second rise overnight, covered, in the fridge. Set out on the counter for 20 minutes while you preheat your oven, and then bake as directed.

I’m seeing this in your very near brunch future. It’s a bright one. 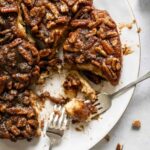 Back to the buns:

If you make these easy small batch sticky buns, please rate the recipe and leave a comment, and tag me in your bakes on Instagram @katiebirdbakes. You can also sign up for my email list to receive my recipes straight to your inbox every time I post!