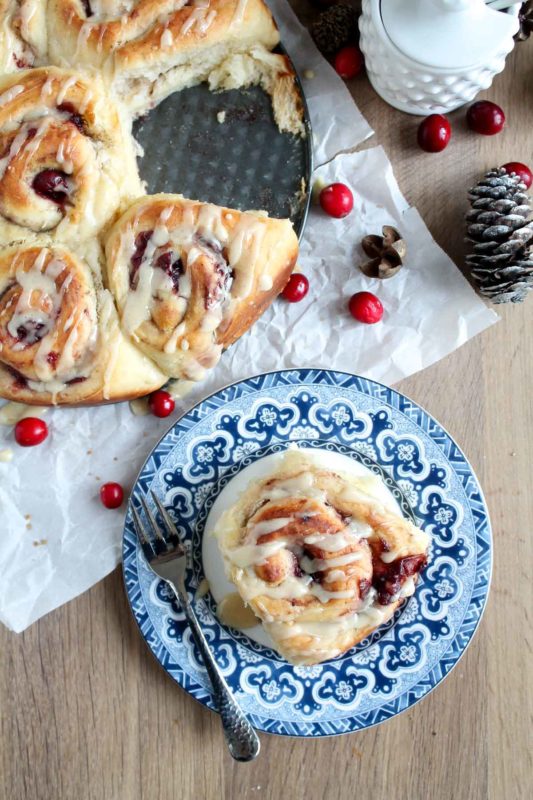 Happy night before Thanksgiving!  I hope it finds you relaxing with friends and family, not stuck in an airport, and enjoying all the food and drinks before the big day.

We flew down to Florida this morning to visit Brian’s great aunt and uncle (they’re both over 90!), and although we had to get up at 3am to get here, we couldn’t be happier to be enjoying the sun and getting away from wintry Chicago.  We’ll be helping to host Thanksgiving at a beautiful condo on the beach, and Brian’s mom Colleen and I will be in the kitchen all day tomorrow.  I can’t wait!  We’re going to try spatchcocking a turkey rather than doing a normal roast…so cross your fingers for us.

Before we left, though, we attended a Friendsgiving this past weekend with some of our friends from college.  It’s always fun to see what people come up with and the different variations they take on the traditional dishes.  One of my responsibilities was cranberry sauce, and we had quite a bit left over – so of course I had to think of a creative way to use it. 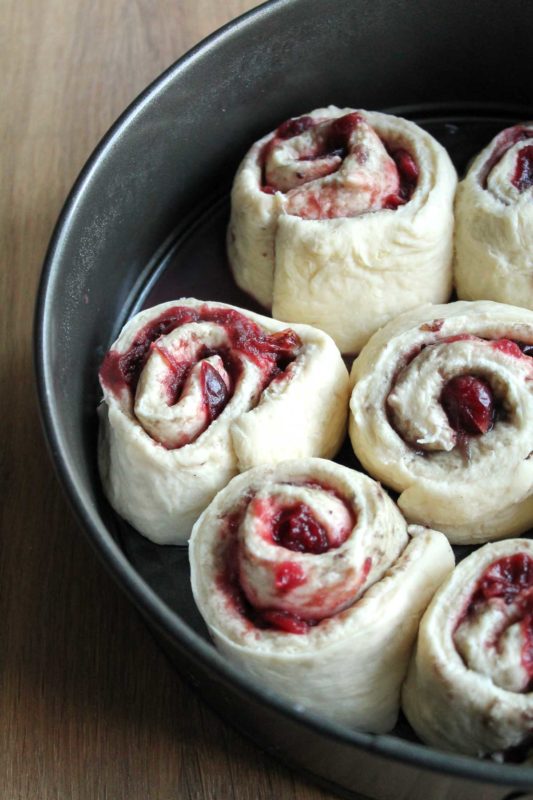 I really liked the cranberry orange rolls I made last year, but those use raw cranberries rather than cranberry sauce.  I wanted a way to use the sauce!  So, I decided to experiment, taking my favorite cinnamon roll recipe (coincidentally, the most popular recipe on my site!) and using the cranberry sauce as the filling instead of the cinnamon/sugar/butter mixture.  What could really go wrong when cinnamon roll dough is involved, right? 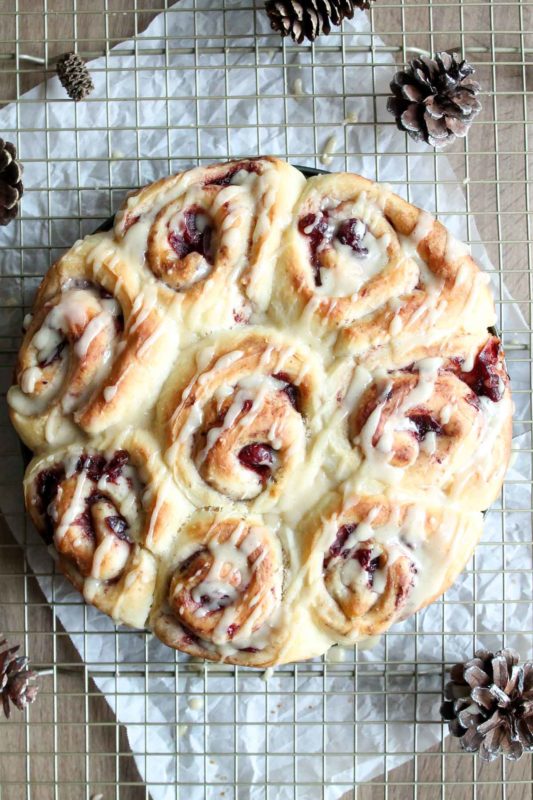 Answer: nothing.  It was perfect.  Our apartment smelled amazing as they were baking, and I couldn’t get enough of the flavor!

I took these to the office on Monday and let’s just say, they went over well.  You can’t go wrong with these little guys. 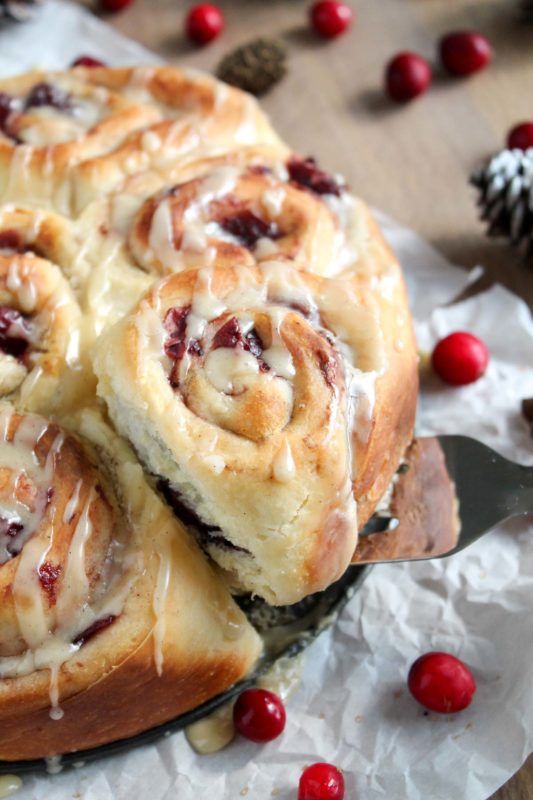 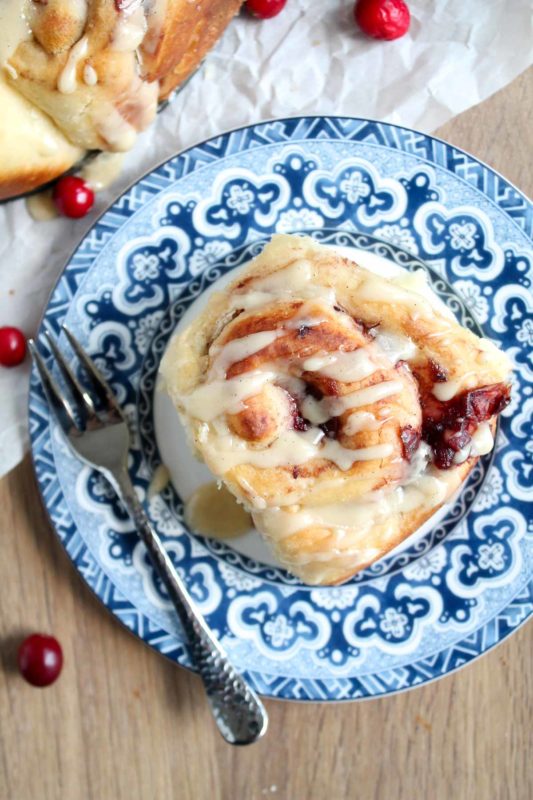 Anyway, one of the better things about this recipe is that not only is it easy to make, you can also make it the night before and let it rise overnight!  That way, you can make the dough while everyone is in a turkey coma tomorrow night, leave it in the fridge, and bake in the morning to pure delight.  I tested it both ways, baking them immediately and baking them in the morning, and I found I liked the flavor of the dough even better when it sat overnight.  The longer fermentation adds some complexity to the rolls that the immediately baked ones didn’t have – but trust me, I don’t think anyone will complain either way. 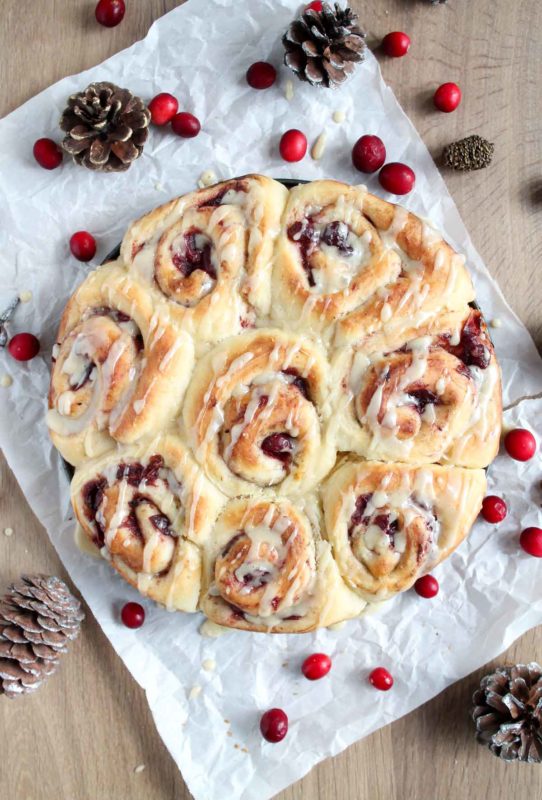 If you want step by step instructions for how to make the cinnamon roll dough, roll it out, and shape it, see my original cinnamon roll recipe or my carrot cake cinnamon rolls.  This is exactly the same process!  The dough is made in a pot on the stove, and once it’s risen it is one of the easiest doughs ever to roll out.  It barely sticks at all!

By the way, I recommend a bench scraper to cut the dough into even rolls – so much easier than a knife.  Trust me on this one.

I hope you can make room for these cranberry breakfast rolls in your life this holiday weekend.  I also hope that it is full of love, laughter, and wonderful food.  Happy Thanksgiving my dears! 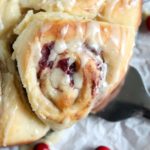 Use up leftover cranberry sauce in the best way possible: these cranberry sauce breakfast rolls can be made the night before and baked in the morning!
Servings: 16 rolls
Author: katiebirdbakes.com

For the Cranberry Sauce Breakfast Rolls:

For the Vanilla Orange Glaze:

For the Cranberry Sauce Breakfast Rolls:

For the Vanilla Orange Glaze:

Store any leftovers (not likely) in the fridge for up to 5 days, and simply microwave for 20-30 seconds to reheat.   Recipe adapted from my cinnamon rolls with cream cheese icing.

Update 11/19/2018: This recipe was featured as part of a seasonal recipe collaboration featuring over 60 bloggers, all celebrating the cranberry!  See the other posts below: 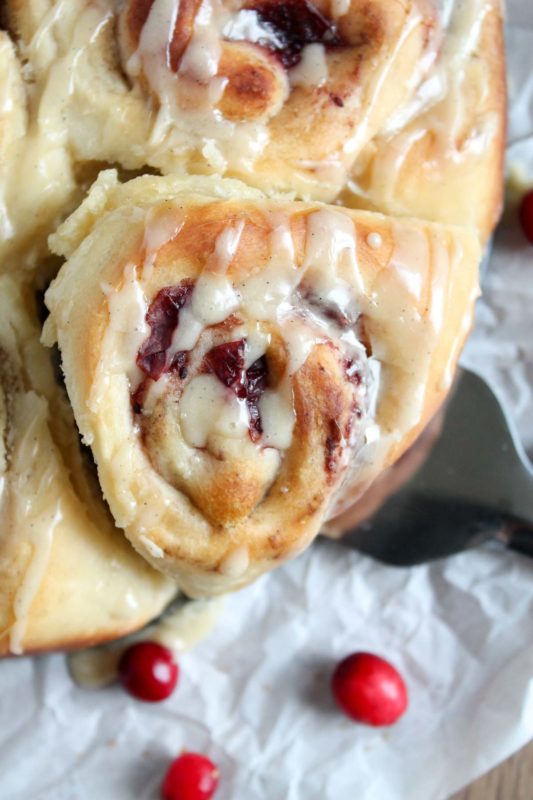