Spiced pumpkin bundt cake is fall in a cake: fragrant, familiar, and comforting.  With two options for the glaze! (Jump to Recipe) 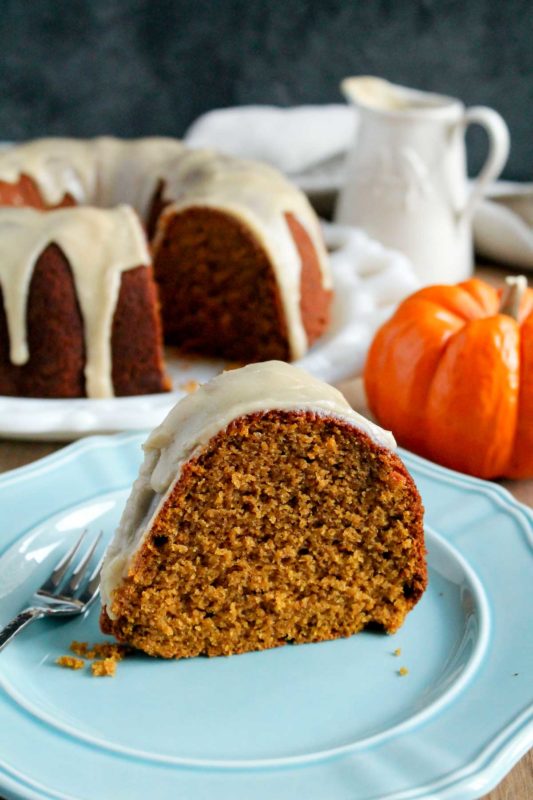 Have you ever had a recipe that sounded perfect and easy in theory, but in practice was extraordinarily frustrating to pull off?  Maybe not – and if not, my hat is off to you.  This happens to me more often than I’d like, especially as I attempt to veer from standard recipes and forge my own way. 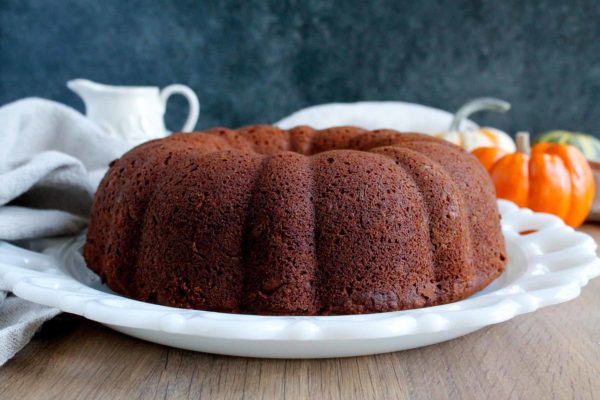 In theory, doesn’t a spiced pumpkin bundt cake sound simple?  What could you really need…pumpkin, flour, butter, eggs, cinnamon…?  Doesn’t sound so bad.  I have fond memories of a pumpkin bundt cake my mom used to make with a can of pumpkin, cake mix, and butterscotch pudding mix, and it always came out positively radiant with fall smells and flavors.  Please tell me someone else remembers this cake or had their mom make it for them.  It was SO good!  She served it simply with whipped cream on top, and it was the greatest.

So a few Sundays ago when I set out to make a version that didn’t contain pre-mixed and boxed things, well, I didn’t expect it would be too difficult.  I knew I wanted to use an entire can of pumpkin, because it really annoys me when half a can languishes in the fridge.  The pumpkin flavor could be brought out with a combination of spices (a la Starbucks pumpkin loaf, which I am not ashamed to admit I adore), and a simple glaze would complement the sweet and spiced squash.  I looked at a few different recipes, cobbled some ideas together, and set to work.  Whisked, creamed, mixed, and folded, and the batter went in the oven.  Fairly soon, Thanksgiving-esque spiced pumpkin smells began to fill our apartment, and I gloated to myself of my genius.  What could make this better?  I said to myself.  Brown butter maple glaze, that’s what.  Cream cheese is so overdone.  So I whisked that together while the cake cooled, which was all the more epic since Brian was blaring the Lord of the Rings – Return of the King soundtrack in the background [I never said we were normal]. 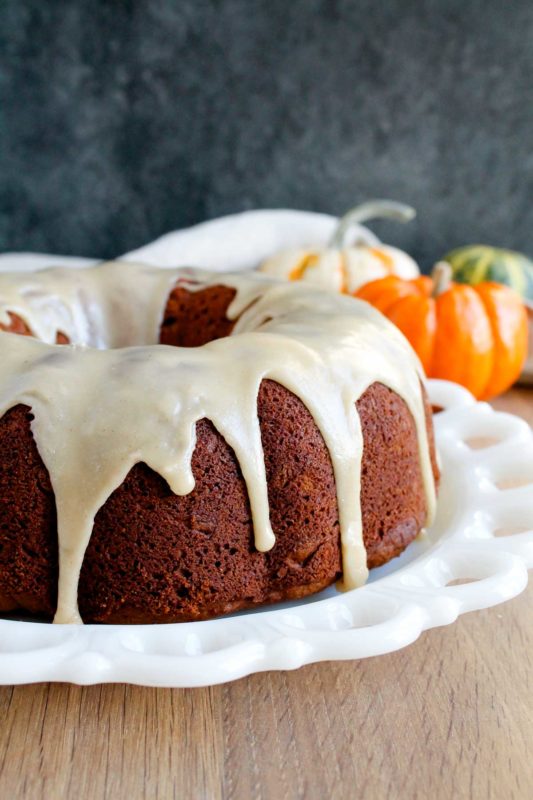 The cake released perfectly from the pan, I poured the glaze over it, took a few pictures, and excitedly cut us two generous slices.  You can imagine what’s coming: it was just not great.  I used far too many spices which made the flavor flat and muddled; the edges of the cake were dry; and the glaze, while certainly the best part and a star in its own right, overtook the other flavors.  Brian didn’t mind and happily ate his piece, but agreed it could use work.  Disappointed, the next day I brought my sad pumpkin bundt cake to the one place where I knew no one would care about its shortcomings: the communal office kitchen.  I was correct – it was gone quickly.

The only person who noticed the same problems I did was my coworker Sarah, who has a similarly discerning palate and penchant for recipe experimentation.  She made the wise suggestion that the cake needed “tang” to balance the sweet pumpkin flavor.  This, I realized, is why cream cheese is always the default partner to pumpkin: the tang.  It offsets the heavy, complex spices with its brightness.  You need the contrast for the flavors to feel right. 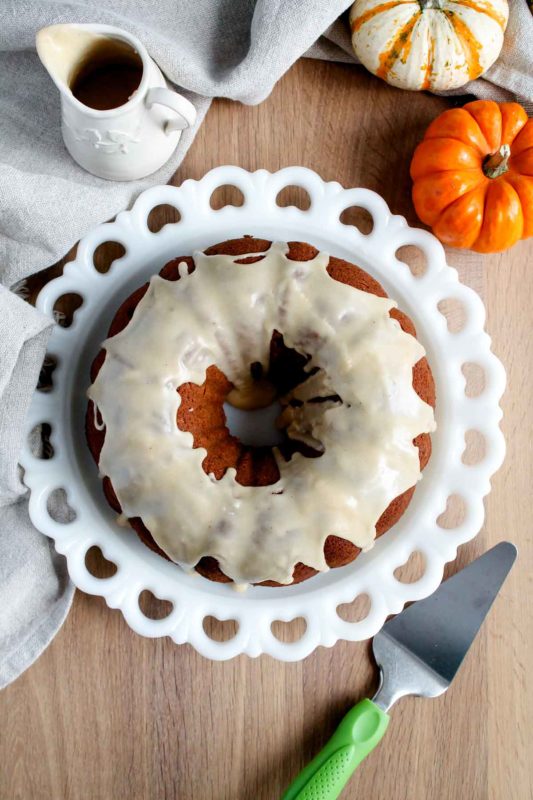 So, the next weekend, I tried again.  I used about half the spices I had before, and added yogurt to the cake for moisture and tang factor.  I wasn’t ready to let the brown butter maple glaze go, so I made it again in hopes that it would complement the improved cake better.  And really, it was fabulous – which is why I’m providing the recipe for it here as an option, because this glaze is really worth making.  The cake came out redolent with pumpkin this time, and tasted of it too.  And the glaze was perfect.  Brian gobbled his piece (and one or two more), and while I loved mine too, I still wasn’t quite satisfied.  The brown butter flavor is powerful, and at times I still felt it overwhelmed the pumpkin.  Again, the results went to the office, and this time I received multiple rave reviews.  So – if brown butter is your love language, please do make that glaze for this cake.  I don’t think you will receive any complaints, and I’m pretty sure I’m just extremely picky. 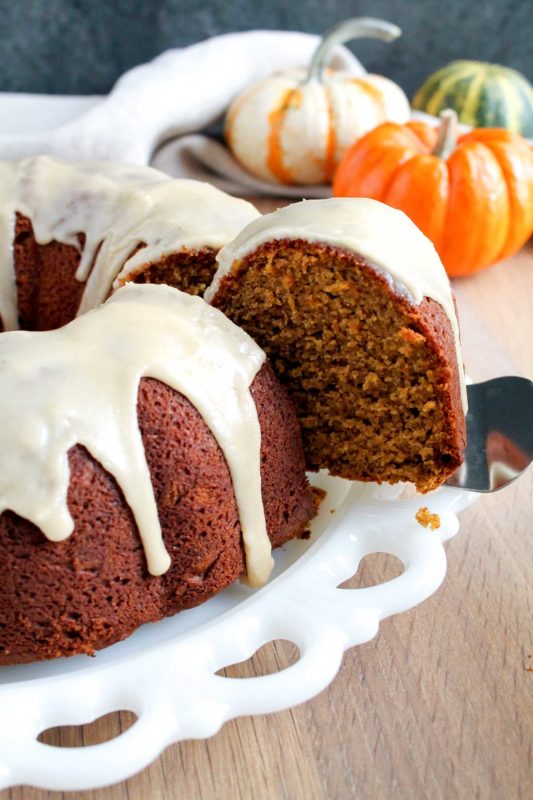 The THIRD time I made this pumpkin bundt cake was last weekend, and this time I went all in on the tang factor with a maple yogurt glaze.  You’ll have to be the judge, but I think I finally nailed it with this one.  The yogurt glaze is not quite as glossy as the brown butter one, but it delivers on flavor.  It’s even better when you poke some holes in the cake with a toothpick before pouring the glaze over, so it sinks into the cake and mixes the flavors.  It gets better as it sits!  I’m sad (very sad) to say that this third attempt didn’t make it to the judges at the office. 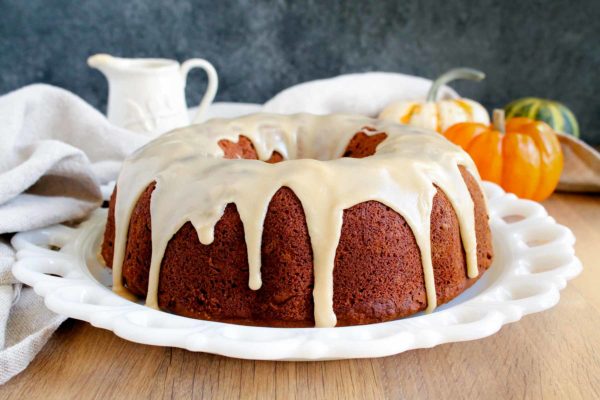 Whichever glaze you choose, would this be out of place on your Thanksgiving table?  I think not.  Everyone needs a break from pie now and again.  Plus, multiple glaze options is like an adult choose your own adventure.  Try it yourself, and tell me which one you prefer! 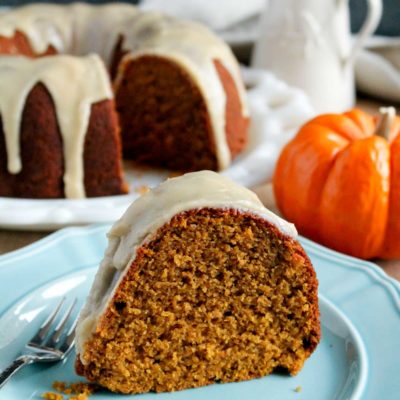 For the Brown Butter Glaze:

For the Yogurt Glaze:

For the Brown Butter Glaze:

Recipe adapted from the New York Times.   Pictures are of the cake with brown butter glaze 0ption. 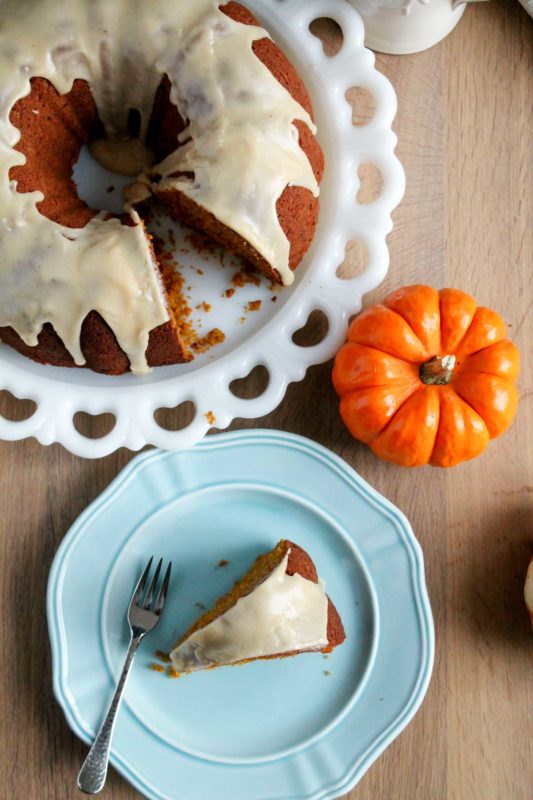