Definitely needing that right now – if there were ever a bread that could soothe our 2020 woes, this chocolate chip pumpkin bread is it.

Let’s talk about it.

I’m actually surprised I haven’t published a recipe for pumpkin bread yet. I’m the girl who would order a slice pretty much every time I went to Starbucks in college, whether it was fall or not. And yes, I ordered my fair share of PSLs too. I may or may not still get a shot of the syrup in my lattes when I go…but just one, because that stuff is WAY too sweet.

Problem: Most pumpkin bread recipes have way too much sugar.

When doing research on the various incarnations of pumpkin bread recipes in the world, one thing became abundantly clear: most rely on a virtual mountain of sugar for flavor. And I get it, because pumpkin puree on its own is not sweet — it’s a squash, not a fruit — but there is no need for 1.5 cups of sugar in ONE loaf. I knew I could do better.

This was a similar problem to the one I encountered when developing my recipe for the easiest banana bread, so I had some tricks up my sleeve that I thought might work for pumpkin bread too.

In that recipe, I used a combination of only 1/3 cup each of brown and granulated sugar for sweetness, combined with the bananas. The issue is that when you reduce the sugar in a recipe, you also lose some moisture and flavor. You have to compensate for that, and I did so with yogurt and melted butter in that recipe.

For this chocolate chip pumpkin bread recipe, I knew I needed slightly more sugar than banana bread because of the squash’s lack of sweetness, but not much more. A hefty dose of yogurt, olive oil, and spices (modeled after the ratios in my spiced pumpkin bundt cake) would provide flavor and moisture, and chocolate chips would provide sweetness on their own.

So after a few (tasty) tests, here’s what it came down to:

I mean, that crust. It’s unreal. Might be my favorite part of this entire affair, though the spices and the combination of pumpkin + chocolate are hard to beat.

When you bake this chocolate chip pumpkin bread, prepare for your house to smell like fall and for everyone to come running to the kitchen. If I could make this smell into a candle, I would – but it still wouldn’t compare.

Highly recommend slathering a warm slice with some salted butter and allowing it to seem into the cracks and crevices and mingle with the melty chocolate chips. That first bite you take is seriously heavenly. Hot coffee on the side would not be amiss here.

The texture of this pumpkin bread is totally plush, the crumb is dense, and the sweetness is just right. Reducing the sugar allows the pumpkin itself and the spices to shine through. You’ll notice I went heavier on the cloves than most recipes do, and that’s because 1. I love the scent and taste of cloves and 2. it’s distinctive. If you don’t like cloves, you can reduce or eliminate and it will be just fine.

What I need, what WE need, is this chocolate chip pumpkin bread on repeat every day for the rest of the fall season. It tastes like, as my friend Colleen put it, “fall in my mouth. Truly heavenly.”

Can’t argue with that. 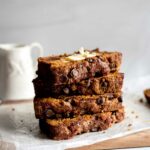 Store: Cover and store leftover chocolate chip pumpkin bread at room temperature for up to 3-4 days, or in the refrigerator for up to a week. Spices: you can substitute 2 teaspoons of pumpkin pie spice in place of the individual spices. Greek yogurt: I used 2%, but 0% or whole will also work.  Could also substitute sour cream if desired. Olive oil: can substitute another oil or melted butter if desired. Flour: can substitute an equal amount of all-purpose GF mix with xanthan gum, or can use replace up to 1/2 cup with finely ground oat flour for a bit more chew to the bread. Pumpkin bread recipe adapted from my spiced pumpkin bundt cake and easiest banana bread.