These apple cider blondies…or apple cider donut bars, whatever you’d like to call them…have been on a long journey.

They started as cookies, way back in September. We were visiting my parents in Philadelphia and I could not get the idea of a crackled, spiced apple cider cookie out of my mind. I wanted to bring out mega apple flavor by employing the same reduced cider trick I’d used to great success in my baked apple cider donuts. Boiling apple cider down to a syrup concentrates its flavor and serves as a sweetener, and the extra liquid worked well in those cake-like donuts.

I mean, the cookies were…fine. I used the right spices and brown sugar for depth, rolled them in sugar, and excitedly watched as they baked. But the final result were puffy, cakey cookies that didn’t actually taste all that much like apple cider, and were nothing like the intensely crackled and chewy cookies of my dreams.

We absolutely still ate them. We’re not barbarians.

But as we sat at the dinner table making our way through a plate of them, my mom said, “wouldn’t these be better as apple cider donut bars?”

Ding ding ding. She was right. Moms always are.

So began the life of these apple cider blondies. But they still had a long way to go before they became the soft, chewy, well-spiced specimens you see in these photos.

I decided the bars needed some heft and so added oats to my recipe. I also discovered that when short on time, it is possible to reduce apple cider in the microwave! More on that below, but my first experiment with apple cider bars wasn’t my best. They were too thin, a bit dry, and needed some interest on top.

We ate them anyway. And I continued in pursuit of my goal of apple cider donut bar perfection for the next two months, in multiple kitchens, as one does during the traveling circus show that is 2020.

To make a long story short: after FIVE iterations (in fact, I baked and photographed the fourth iteration thinking it was final, but immediately decided it was not) involving varying levels of spices, oats, glaze vs. no glaze, sugar topping vs. no sugar topping, and sizes of pans, I finally have an apple cider blondie recipe that I am proud to share.

No need for a mixer

A sprinkle of sugar on top makes a big difference

You know you want to be the one who took that bite. 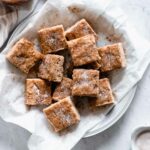 Storage: Bars keep, covered at room temperature, for up to 5 days.  To freeze, wrap the cooled bars in plastic wrap and store in a freezer bag up to 3 months.  Thaw at room temperature for an hour or in the microwave for 30 seconds before serving. To make gluten-free, substitute an equal amount of an all-purpose GF mix with xanthan gum for the all-purpose flour, and make sure your rolled oats are certified gluten-free.