No need to make a special trip to the apple orchard – these homemade baked apple cider donuts are the real deal. The recipe uses reduced apple cider in the batter and the glaze for maximum flavor, and the entire donut is coated in cinnamon sugar for the perfect crunch. Makes 8 donuts!

No Apple Orchard, No Problem

Raise your hand if you go to the apple orchard ENTIRELY for the apple cider donuts at the farm store (ok, and maybe for Instagram)…

Yeah, me too. There’s no point in denying it.

I created this recipe for a homemade, baked version of the apple cider donuts we all love so you don’t have to brave wasps and crying children just to get your fix. You know, I’m always looking out for you.

Apple cider donuts are unquestionably one of the best parts of fall at the apple orchard.  Turns out, they’re fairly easily adapted into the baked variety, so if you happen to find yourself with some extra apple cider lying around and a craving for donuts on a crisp weekend morning, you are in luck.

In less than an hour, you’ll be in baked apple cider donut bliss – no deep fryer needed.

The thing I DON’T like is tasteless, too-sweet, not-apple-cidery donuts. I had one from a donut shop here in Chicago last year which shall remain nameless, and to say it was tasteless really would be generous. There’s more to this donut than spices and sugar! It has to have distinct apple cider flavor WITH the spices to compliment.

For a further discussion on this point, see my entry from last fall, Apple Cider Donut Bars. Much testing was done to come to that result – poor us. If you don’t feel like shaping individual donuts but want the taste of a homemade apple cider donut, that bar recipe is for you.

Here’s what you need:

What can I use instead of apple cider?

If you can’t find American-style apple cider, the most similar thing to use is apple juice. I do NOT recommend using fizzy alcoholic cider in this recipe. American apple cider is just a less-filtered version of apple juice so the best substitute for these donuts is apple juice!

Can I make these apple cider donuts into muffins instead?

Yes, and they were so good that I gave them their own post: apple cider donut muffins!

What donut pan do you use?

This one! It’s nonstick, washes very easily in the dishwasher, and is inexpensive. I have two!

The first grey Saturday when I made these a few years ago, Brian and I each ate two, still warm from the oven.

The next day, my friend Kathryn came over for brunch, and all that were remaining were polished off in quite short order.

I made them again this past weekend so I could have a video for you, and my friend Colleen proclaimed them “melt in your mouth AMAZING” so…I think you get the picture…these are worth every moment you spend making them. 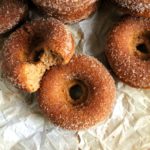 For the Baked Apple Cider Donuts:

For the Cinnamon Sugar Topping:

For the Baked Apple Cider Donuts:

For the Cinnamon Sugar Topping:

Storage: Donuts are best eaten the same day, although they will keep for up to two days, covered tightly and stored at room temperature.  Baked donuts can also be frozen, wrapped tightly in plastic, for up to 3 months.  Thaw at room temperature for an hour or in the microwave for 15-20 seconds and enjoy. *NOTE: use American-style apple cider for this recipe, NOT fizzy alcoholic cider.  The most similar thing is apple juice if you can’t find apple cider! These are the donut pans I use and love.  They’re dishwasher-safe! Adapted from my Baked Banana Donuts.