Carrot Cake Cinnamon Rolls combine the pillowy softness of cinnamon rolls with the warm flavors of carrot cake, and the result is the most perfect springtime pastry.

Guys, I did something.  I was nervous about how it would turn out, but sometimes in the kitchen, as in life, you just have to take risks.

Luckily for us, the risk paid off big time.

Yes.  I combined two of my very favorite baked goods – cinnamon rolls and carrot cake – into one.  The marriage of these two is seriously a match made in heaven.

Carrot cake is like a big hug, if food could be a hug.  The flavors are warm and comforting from the spices, but it’s also spring-like (and healthy-ish) because carrots, and smooth and creamy with the tangy cream cheese frosting.

I’ve loved carrot cake since I was very young, when we used to go to a bakery on a farm near my house on Sundays and get big slices with those bright orange and green icing carrots on top.

I have a recipe for a single layer carrot cake already, but this past weekend I could not contain my mad scientist idea to combine the spiced flavors of carrot cake with the warm, gooey, comfort-anytime meal better known as cinnamon rolls.  You can’t be unhappy when you have cinnamon rolls, it’s just a fact.  So really, this recipe is like a giant bear hug to you.  And it’s perfect to share that bear hug with those you love for Easter brunch!

I adapted this recipe from my version of the classic: Cinnamon Rolls with Cream Cheese Icing.  It’s the easiest cinnamon roll recipe I’ve ever made, in that it doesn’t require kneading, and the dough is made in a Dutch oven!  No mixer necessary, just a wooden spoon and a rolling pin.  That’s the kind of baking I like.

Oh yes, look at those gluten strings there on the right.  That’s how we know we’re getting somewhere.

People think since cinnamon rolls are so delicious and yeasty, they must be difficult to make.  Not so.  We just heat milk, oil and sugar in our pot, add the yeast (when the mixture is cool enough not to kill it), and then we add our carrot, spices, and flour.  Let that sit on the stove for an hour or so, until it’s doubled in size.  Then add some more flour, some baking powder and soda and salt, and roll that baby out.

I do half the dough at a time to make it easier – also, because I live in an apartment and my counter is very small.

I added cozy carrot cake spices to the dough AND the filling for these carrot cake cinnamon rolls, for extra spiced oomph.  We mix it together with brown sugar for warm sweetness.  This is going to be good.

Spread some melted butter on the dough, then add the sugar mixture on top.  Starting with the long edge furthest from you (the top of the dough in this picture), roll the dough towards you, moving your hands evenly back and forth along it, until you have a coiled dough.

Cut it into 8 even slices (I used my bench scraper for this, but a very sharp knife will work too), then load it in a round cake pan.

Look at all that carrot in there!  This is totally healthy…

These rolls get another little rest on the stove before you put them in the oven, so they can expand to their full glory.  When they come out of the oven, the smell is aromatic and heavenly.

While you’re waiting for them to come out, whisk together some cream cheese, butter, sugar, vanilla, and milk for our glaze.  So simple.  So good.  This is how every Easter brunch should be.

Gooey, soft, sweet, spiced and warm.  Serve with some hot coffee and a lazy Sunday.  I topped my rolls with some toasted coconut for extra carrot cake flavor – totally up to you.  If you’re a purist with your carrot cake, I totally understand.  For example, I don’t know why anyone adds pineapple to carrot cake, but that’s a gripe for another day.

This recipe goes down as one of my favorites I’ve ever created.  I hope you love it too!  Happy Easter! 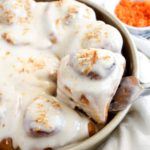 For the Carrot Cake Cinnamon Rolls:

Store any leftovers (not likely) in the fridge for up to 5 days, and simply microwave for 20-30 seconds to reheat. IF YOUR DOUGH IS STICKY: put it in the fridge for at least an hour, up to overnight before rolling it out.  Make sure the surface you roll it on is WELL floured, and sprinkle some flour on top of the dough before rolling.  Add flour to your rolling pin if it starts sticking to the dough. Make ahead overnight instructions: these carrot cake cinnamon rolls can be prepared the night before through step 6 (shaping the rolls and placing in the pans).  Cover pans with plastic wrap and place in the fridge overnight.  In the morning, set pans out on the counter while the oven is preheating to allow rolls to come to room temperature, then bake as directed. Freeze the baked rolls: baked and iced rolls can be frozen, wrapped individually in plastic wrap and stored in a freezer bag, for up to 3 months.  Simply microwave for 30 seconds or warm in a 250 degree oven for 15 minutes to reheat.  Freeze the dough: Shaped cinnamon roll dough can be frozen, well-wrapped in the pan or another container, for up to 3 months.  Set out on counter for 2 hours before baking to allow to come to room temperature and complete their second rise.  Bake as directed. If you like, top with some toasted coconut – you can do this by toasting shredded unsweetened coconut on a parchment-lined baking sheet in the oven at 350 degrees F for about 5 minutes, until browned.   Recipe adapted from my Cinnamon Rolls with Cream Cheese Icing.

I won’t admit how many of these Brian and I ate all by ourselves, because it’s too embarrassing.