Grated zucchini makes for a surprisingly rich and dense chocolate cake, and with chocolate ganache over top, this chocolate zucchini cake is fudgy and intensely chocolatey in just the right way.

As tends to be the way when I try to put zucchini in baked goods, this one took a few tries to get right.  Luckily, I had a lot of zucchini coming to my door thanks to my friends at Imperfect Produce.  This is my second recipe in partnership with them!

You might recall last year when I discussed at length my issues with zucchini weighing down this zucchini cream cheese pound cake.  That one took several tries before I could even get to the point where I’d let other people (including Brian) taste it.  A lot of cakes were wasted and it was quite tragic, really.

99 problems and zucchini definitely is one

So this time, when I decided I was going to turn a zucchini into a chocolate cake (that’s real 2018 magic) I knew what the problems were going to be:

In the photo above, you can see how my first try at this chocolate zucchini cake came out.  I used 2 cups of grated zucchini and squeezed the heck out of it with paper towels before I added it into the batter.

This led to a very sturdy cake batter, but when the cake was baked, it was fairly dry and actually lacking in flavor.  My coworker Sarah described it as a “snack cake” consistency, which I think is spot on.  It was ok, but it wasn’t the rich fudginess I was hoping for with this cake.

Plus, the zucchini basically disappeared into the cake, which in theory is what we want but actually, I missed the texture and sort of velvety-ness I thought it was supposed to add.  Basically, this was a mediocre cake and I was annoyed.

Luckily, there was a Round 2.

After grumbling to myself for a few days, mostly about my own arrogance and why I even bother with finicky old zucchini, the craving for chocolate cake once again became too strong to ignore.  This time, I threw caution to the wind and let the zucchini do what it’s supposed to do in a cake like this: add moisture, bulk, and texture.

Here’s what I did differently:

This was definitely, definitely the lazy person’s way of making this cake.  And you know what?

This time, the cake turned out exactly how I’d imagined a chocolate zucchini cake would.  It was rich, intensely chocolatey, and had exactly the right density – almost like a fudginess.  But it’s not heavy.  It’s just delicious.

Don’t run away because I said chocolate ganache – it’s not fancy, I swear.  Just heat heavy cream and then pour it over chopped chocolate (even chocolate chips), wait a minute, then stir.  That’s it.

So basically, when you eat this chocolate zucchini cake you not only get your veggies in, but you also get to be lazy with the zucchini and make easy chocolate ganache to impress everyone.  What’s not to like? 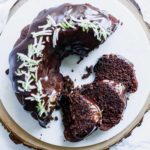 For the chocolate ganache:

*For the shredded zucchini, you can grate it by hand, or I used the grating blade of my food processor.  I did not squeeze the moisture out of the zucchini; rather, I grated it before I started the cake, let it sit in a bowl during the 20 minutes or so I was making the batter, then poured off the liquid that had accumulated at the bottom of the bowl.  The zucchini provides the necessary moisture and texture in this cake so don’t squeeze too much moisture out of it!   Cake will keep, well-wrapped at room temperature for 2-3 days or in the refrigerator for up to 5 days.   Recipe adapted from King Arthur Flour.

Thank you to Imperfect Produce for sending me the zucchini I used in this recipe.  All other opinions are my own!  If you want to sign up for your own Imperfect Produce deliveries, you can get 40% off your first box with code “katiebirdbakes“!