Have I got a treat for you.  We’re making homemade nut butter today! And not just any nut butter.  Pecan butter.  Bourbon vanilla pecan butter.  As if pecans weren’t already good enough on their own.

How is your new year starting out?  Did you begin it with a hangover, like me?  Or were you virtuous from the beginning?  I always think it’s hard to start your year off on a fresh note when you’re still recovering from NYE festivities.  I think there should be an extra buffer day in between to let us get our bearings.  It was nice, though, that most people didn’t have work today.  Brian and I were able to just hang out and relax together at home, especially since it was rainy and gross out in Chicago (which is still better than snow).  We both worked out during the day (him on the treadmill, me pilates) because we’re heading to Hawaii with my parents in February, and we are NOT feeling ready.  Bikini in February…yikes.  There’s a reason most of us are wearing large sweaters at that time of year.

I’m trying to come up with some healthier recipes for us to make the next couple of months to hopefully fight the winter bulge.  This Bourbon Vanilla Pecan Butter is my way of being healthy yet still feeling like I’m treating myself.  There are only 4 ingredients – pecans, almonds, vanilla, splash of bourbon – and no sugar!  These pecans are sweet enough on their own that we don’t need it. Until very recently, I had never made my own nut butter.  I bought and stockpiled almond and peanut butter from Trader Joe’s like a fiend, especially when I was in law school and lived two hours from the nearest TJ’s.  Don’t they have the cheapest (and best) nut butters around?  So good.  If I’d realized then just how easy and cheap it was to make it myself, TJ’s would’ve sold a lot less.  I don’t think they’ll mind since I usually buy my nuts from them anyway.  The first time I made my own almond butter, though, I knew I could never go back to the pre-made stuff.

We start with toasting our nuts on a baking sheet.  This both adds a deeper flavor and warms the oils in the nuts so they will process into butter faster.  I just lay mine out in an even layer and toast at 350 degrees for 8-10 minutes, until fragrant.  I added almonds to the pecans to give it a mellower flavor; feel free to use all pecans if you so desire. Next, we add the toasted nuts to the bowl of a food processor.  Mine is a 9-cup and I wouldn’t recommend using one much smaller than that for this recipe.  You could also try using a high-powered blender like a Vitamix, but I’ve found I prefer the consistency of nut butters made in the food processor better.

Process the heck out of the nuts for several minutes.  This was the part that was hardest for me to learn – it will take much longer than you think it should.  You’ll have to stop and scrape it down several times.  At a certain point, it will ball up and you’ll think it’s never going to smooth out, but just keep going – it will.  Trust me, it’s worth the wait. Finally, just after you were about ready to give up, the heavens part and this luscious nut butter appears in your food processor.  It’s seriously magical.  You could stop here once you’ve gotten the consistency you want, and it would be totally delicious on its own.

But I’m not stopping here.  I’m adding vanilla bean paste (you can add vanilla extract or the scraped seeds from a vanilla bean if you prefer) and just a splash of bourbon, for a hint of decadence.  The heat of processing will get rid of the tiny amount of alcohol, and those extra bits of flavor take this totally over the top.  I could not stop eating it with a spoon, straight out of the food processor.  It’s that good. Pour it into a jar, if you have the self control, and store it in the fridge for up to a month.  This is amazing on toast, PB (that’s pecan butter) & J, apples, bananas, oatmeal, muffins, and celery sticks.

Or just, you know, with a spoon. 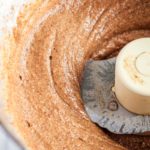 *Here is the vanilla bean paste I use.  It has such an amazing flavor and you can use it in place of vanilla extract in any recipe!   If your nuts are unsalted, you may want to add up to 1/4 teaspoon of salt as well.  Depends on your taste!
« Gingerbread Bundt Cake with Cream Cheese Frosting
Lemon Ricotta & Spinach Pasta »